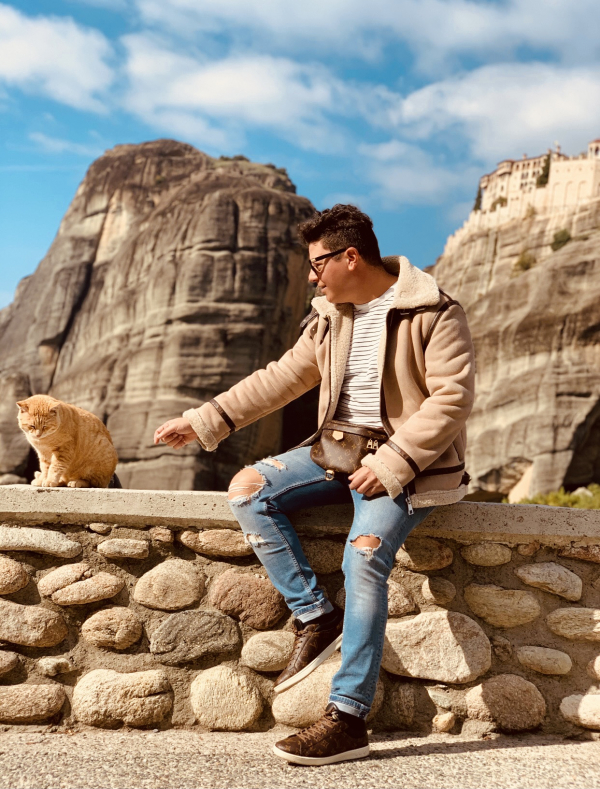 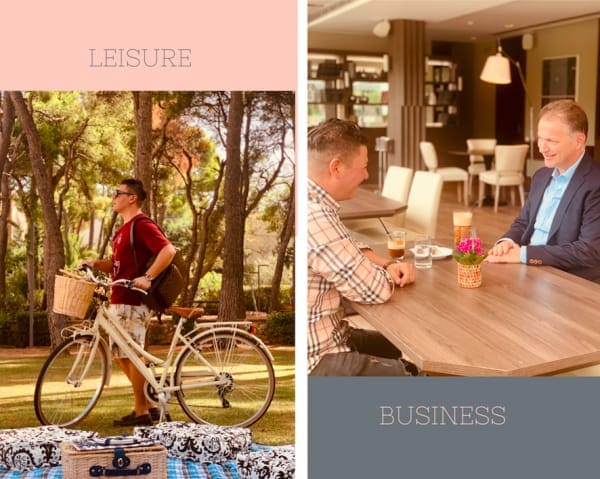 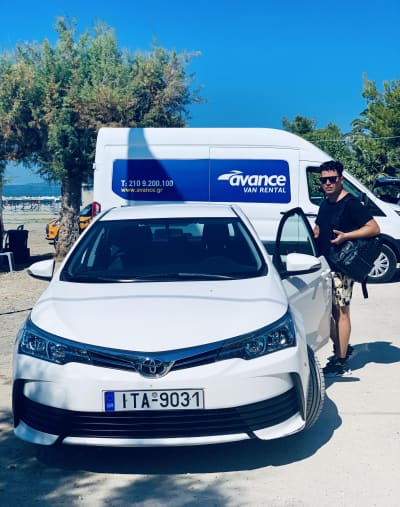 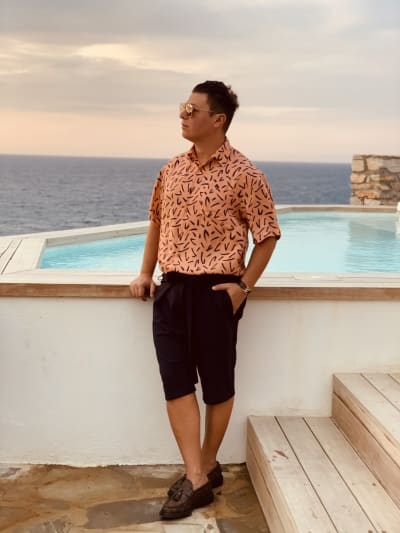 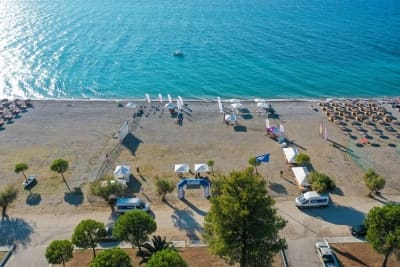 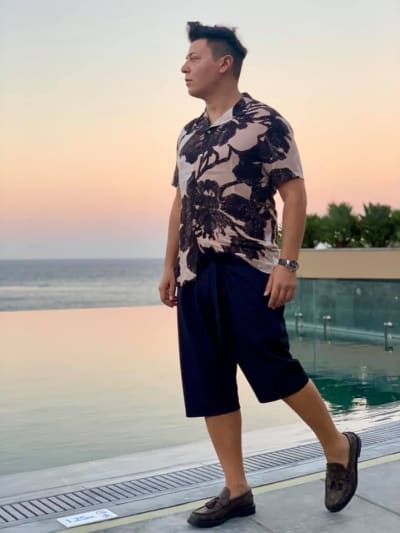 Daios Cove Luxury Resort & Villas’ exclusive location, along with its impressive architecture seamlessly blending in with the rugged surroundings creates a natural hub of beauty and serenity to explore. 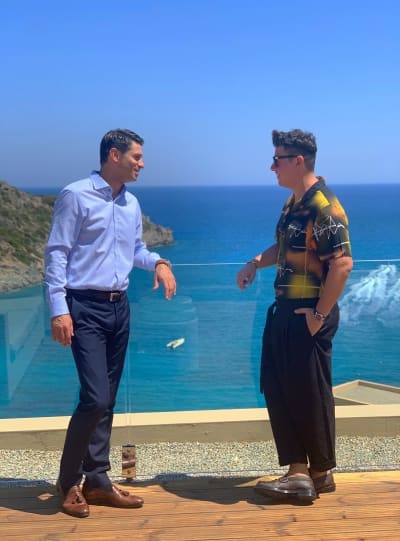 A case study resort in Greece demands a "case study" General Manager, just like Panos Almyrantis who leads Daios Cove Luxury Resort & Villas in Crete for the past 10 years in a row! 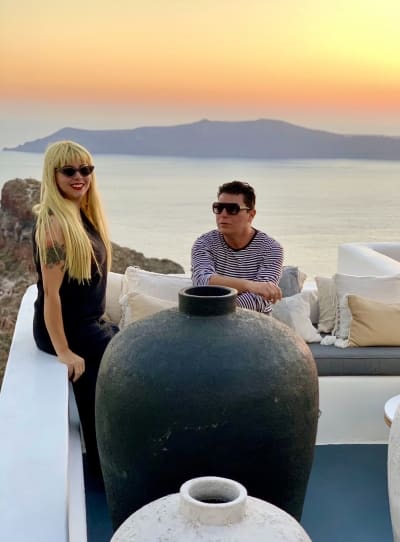 We met with Frantseska Tsebelis of Oikos Tsebelis Architecture at the brand new restaurant of Astra Suites, ‘Five Senses’, her latest project that with its unparalleled design made the whole Caldera turn heads.. 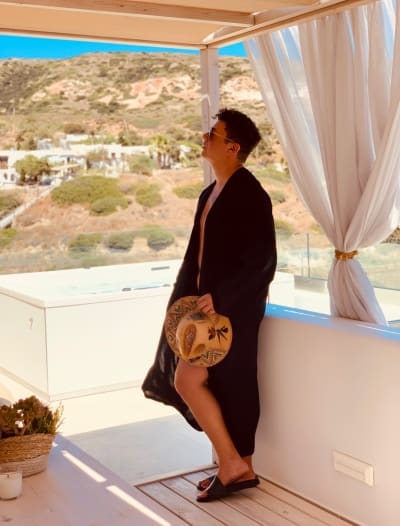 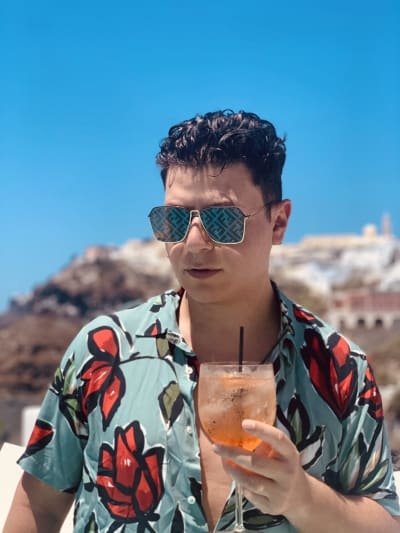 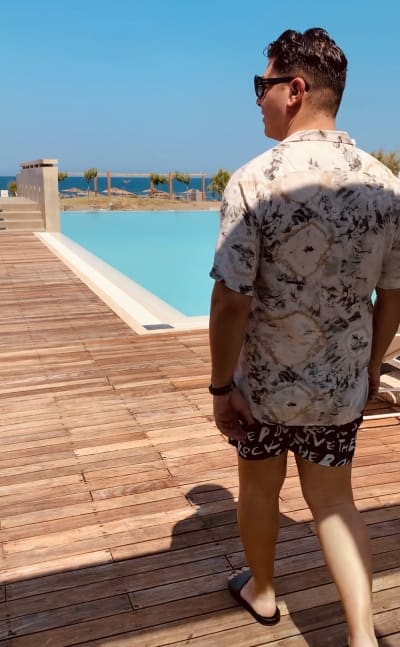 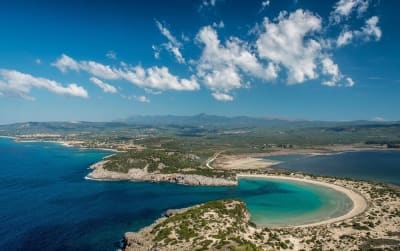 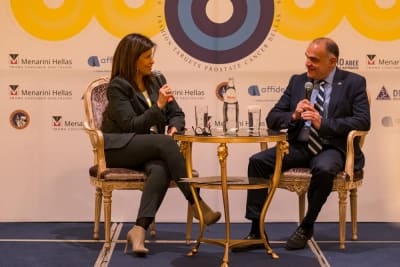 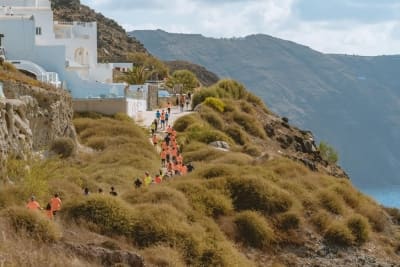 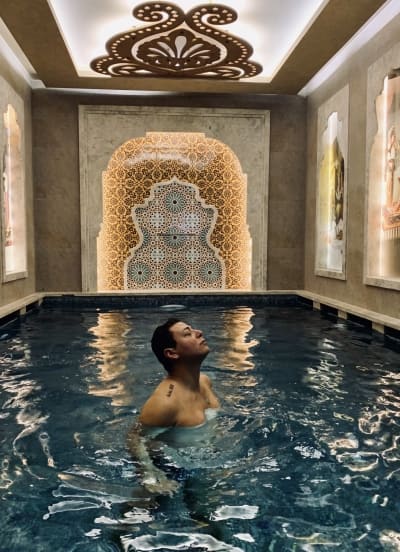 Romance Istanbul has been transformed from a run of the mill establishment to one of the most luxurious hotels, right in the heart of the old city of Istanbul, where Europe connects to Asia. 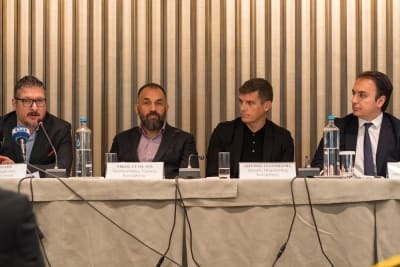 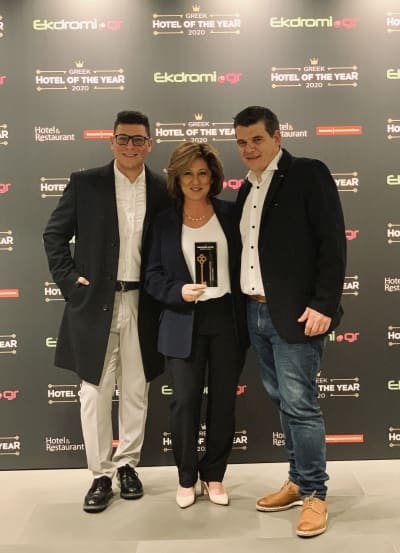 Photo: Artemis Argyrou and Panagiotis Iglesis of Athina Luxury Suites in Santorini holding the award during the ceremony in Athens. 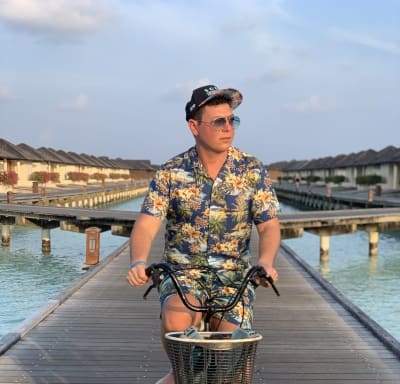 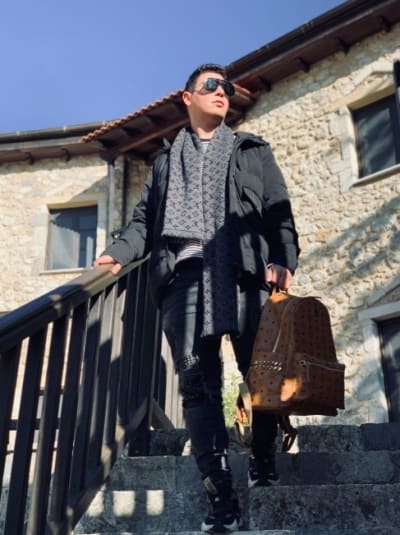 Trikolonion Country Hotel  is the coalescence of 4 impressive towers  and stands for the combination of wood and stone unique aesthetics. 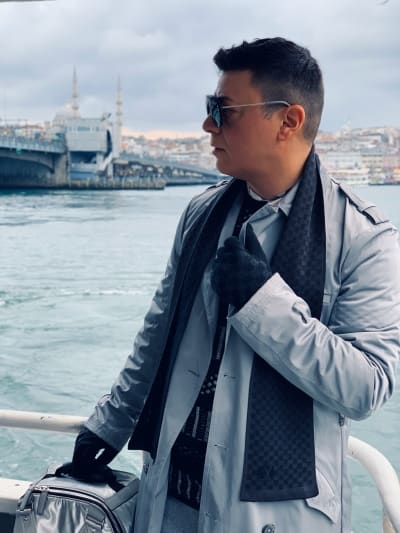 The only city in the world on two continents, Europe and Asia.

A visitor can listen to the Muslim call to prayer while standing in the shadow of the Blue Mosque and feel transported to another time!

Ancient, beautiful, and huge— Istanbul is not a city you can come to grips with in a single day. Turkey’s largest metropolis touches two continents across the Bosporus Strait. Remnants of past empires including the Byzantine and the Ottoman give the city, home to almost 15 million people, a historic charm. Stir in ambitious modern projects such as the country’s largest mosque and you have quite a stew.

Hagia Sophia is an experience in space and time, and the architects’ magic still works after more than fourteen centuries. The awe is of age, of history, and of miraculous architecture! A few more steps, and the vision is clear and beautiful..

Once the world’s largest cathedral, the Hagia Sophia was erected in 537 AD as a Byzantine basilica before it was converted into an Ottoman mosque in 1453. Still as jaw-droppingly stunning as the day it was finished, the Hagia Sophia is now a museum that welcomes architecture and cultural lovers all year round.

At 19 miles long, the Bosphorus not only connects the Black Sea with the Mediterranean, but also splits Istanbul between two continents, Europe and Asia. Probably one of the most important straits in the world, this watery boundary houses numerous Byzantine and Ottoman fortifications as well as a mixture of residential homes, making it ideal for a boat trip.

Near the mighty Hagia Sophia Basilica and the magnificent Topkapi Palace, Hodjapasha Cultural Center is a delightful piece of the city’s striking cultural mosaic. Transformed from a large 15th-century hamam (Turkish bath), it now welcomes visitors under its high dome ceilings to showcase some of the best of this vast country’s traditions.

Watch the mystical ritual of the Mevlevi Order, whose whirling dance has been declared a UNESCO Heritage of Humanity. The Sema ceremony is a journey through man’s spiritual ascent to “perfection” through mind and love—a truly unmissable and astonishing experience of music and moves.

In the Depths of History

One of the magnificent ancient buildings of İstanbul is the Basilica Cistern located in the southwest of Hagia Sofia. Constructed for Justinianus I, the Byzantium Emperor (527-565), this big underground water reservoir is called as “Yerebatan Cistern” among the public because of the underground marble columns. As there used to be a basilica in the place of the cistern, it is also called Basilica Cistern.

Except couple of the edged and grooved columns of the cistern, majority of them are shaped as a cylinder. Two Medusa heads, which are used as supports under the two columns at the northwest edge of the cistern, are the great work of art from the Roman period. What attracts most attention from the visitors is that the structure from which the Medusa heads have been taken is unknown. The researchers often consider that it has been brought for being used as supports to the column at the time of construction of the cistern. However, this has not prevented myths for the heads of Medusa.

As the legend has it, Medusa is one of the three Gorgonas that are female monsters in the underground world in Greek mythology. The snake-head Medusa, one of the three sisters, has the power of gorgonising the ones that happen to look at her. Accordingly, Gorgone paintings and sculptures were being used for protecting big structures and special venues in that time. And putting the head of medusa in the cistern was for protecting purposes. According to another rumour, Medusa was a girl who boasted for her black eyes, long hair and beautiful body. She loved Perseus, the son of Zeus. Athena was also in love with Perseus and this made Medusa jealous. Therefore, Athena converted medusa's hairs into snakes. Now, everybody that happened to look at Medusa was gorgonised. Afterwards, Perseus headed off medusa and beat many enemies by using her power.

Therefore, the head of Medusa was engraved on the handles of the swords in Byzantium, and applied onto supports of the communes in reverse (so that the onlookers would not be gorgonised). According to another rumour, Medusa gorgonised herself by looking sideways. For this reason, the sculptor that made it generated Medusa in three different positions depending on the reflection angles of the light.

Aside from its staggering size and exquisite beauty, one of the most distinctive elements of this Istanbul mosque is that it has six minarets, as opposed to the usual two or four of most of the city’s mosques. In the history of the Blue Mosque, legend has it that this is because of a misunderstanding – when the Sultan decreed there should be altın minare (gold minarets), the architect heard altı minare (six minarets) – an easy mistake to make! This caused some controversy, as the only other mosque with six minarets at that time was the Prophet’s mosque in Mecca – a problem the sultan overcame by ordering a seventh to be added in Mecca.

First impression:The lobby is minimalist and modern, with the check-in desk located on a round marble platform. Check-in is a sit-down affair during which guests are served free coffee or tea. You never get a second chance in making an excellent first impression. That is of great importance when it comes to a luxury hotel. There's more than meets the eye – beyond its design and decoration what really steals a guest's heart are the people. And at Sultania hotel they know how to treat you like.. a sultan!

The WOW factor•That is the feeling you get after entering a beautiful room – a fresh, neat and comfortable room! Hotel Sultania will make you “feel like a sultan” in its luxury rooms, each named after most important Sultan's Wives. The hotel harmonizes the modern lifestyle with traditional Ottoman touch. With its luxuriously inspiring design and landmark old city location, steeped in the history of its surroundings, Hotel Sultania welcomed us with exceptional harem style and world-renowned Turkish hospitality.

Rooms have tasteful Ottoman-inspired decor and marble bathrooms. The interior design of a hotel tells so much for its character – the one thing that wins a guest’s heart from the first second. That is the importance of every detail being harmonious from the finest to the biggest. The rooms at Hotel Sultania are decorated in tasteful Ottoman-inspired decor. There are Ottoman designs on bed runners and/or bolster pillows, back lighting, wooden floors, and in some rooms, intricate metal scrollwork. Housekeeping puts small welcome treats on the bed, such as squares of Turkish delight.

Location plays an important role. A traveler pays special attention to a hotel’s location since it is vital to be easily accessible, situated near the city centre. The property is just 5 minutes' walk from Sultanahmet Tram train station that makes it really convenient for all transportations including the new airport. All Old City's top attractions are within walking distance.

The hotel features a heated pool along with a sauna and a marble hammam. A traveler seeks a wide range of experiences when visiting a luxury hotel therefore it should be considered a guest’s nest, providing serene and relaxing sentiments. They are perfect to re-energize your mind at the end of the day whether you are traveling for business or pleasure. My experience at Sultan Spa: The turkish bath is really worth every single penny. Starting the weekend with an authentic Turkish Hammam experience, where you await your destiny with anticipation. In Turkey, you pay for a good pampering, and it’s better known as tradition. It’s something you HAVE to try in Istanbul!

Its rooftop restaurant with views of the Hagia Sophia, Bosphorus and Golden Horn serves delicious meals. For someone living inside a luxury hotel, like I do, having the opportunity to enjoy fine dining, unsurpassed services in a magnificent atmosphere is of the essence. This is exactly the core of Olive Restaurant: excellent service, very good menu, good views and value for money.

The impressive breakfast buffet with many extras. Of course you should order a turkish coffee accompanied by famous turkish delights!

The Guest Relations’ services were custom made and to the point. The supervisor was very kind and friendly willing to help us in every single step of our journey. You can tell when there is special attention to detail. Luxury lies beyond bedazzlement; you can find it in those fine details that represent high standards and excellence in customer service. After all, that is what will emotionally "bind" the guest with the hotel and ultimately, bring him back.

Overall impression: HOME AWAY FROM HOME • What a wonderful feeling... Feeling at home when actually being a thousand miles away from home.